explanations of terms and expressions
(as pertaining to monument crafting; our definitions –not Webster’s)

BASE – the bottom part of a monument; usually a wider cut of grey granite.  A base adds stability and elevates the inscribed part of the monument above plantings and also protects it from damage by cemetery maintenance equipment.  LONS includes standard bases with all upright monuments at no additional cost.

BEVELLED – sloping or cut on a slope.  A tablet, or even a base can have a bevelled surface in order to make an inscription more easily read from an angle.

COLUMBARIUM – an above-ground chamber with niches for the entombment of cremated remains.

CONTRAST – the difference in colour or brightness between the granite and the engraved work on it.  Type, colour, and finish of granite determine the amount of contrast.  At LONS, we ensure that the granite and engraving types are appropriate for each other so that artificial colouring or "paint" is not required.

CORNER POSTS – small granite markers, usually about six inches square, which are placed at each corner of a cemetery plot.  A family name or initials are usually inscribed diagonally on them and face toward the plot.

DIE – common to many manufacturing processes, this refers to a blank piece of material ready for finishing into a product. In the monument industry it properly refers to the granite that is to be engraved, and has come to also reference the finished product.  This is an unfortunate term to be used in our line of work, however, and efforts, (largely unsuccessful), have been made to re-introduce the use of the term "tablet."

DUSTING – a shop expression for lightly sandblasting a polished surface.  On certain granites, it is done to create a panel for the lettering in order to provide greater contrast.

ENGRAVING – lettering or artwork cut into the granite. Engraving granite is more of a sculpturing process than sign or jewellery engraving.

EPITAPH – some meaningful statement engraved on a memorial that relating to the deceased.  It usually consists of a line or two, but can be longer; such as a poem, description or explanation.  An epitaph is not necessary, but should be carefully considered.

ETCHING – artwork (and occasionally lettering)  that is produced on the surface of granite.  It has texture, but no defined shape, and is best applied on dark, fine-grained polished granites. Etchings can be very detailed and are often used to reproduce portraits or complex scenes from photos.

FOOTING – the concrete base on which a monument is placed. A footing provides a flat, level, stable support for the monument.  Some cemeteries install their own footings. LONS pays these charges at no additional cost to our clients. Footings installed by LONS are lifetime guaranteed.

FROSTED – the (appearance of the) surface produced by a short session of light sandblasting, particularly on glass.  Similar terms: dusted, etched.

FOOTSTONES – small granite markers placed at the foot of graves to help identify locations of burials. These stones are normally about a foot long by six inches and are inscribed  with a first name or other identity such as mother,  father, etc. Footstones are not as common as corner posts, being most often used for burials other than the traditional husband-wife placement. Examples; family (three or more) interments, cremations, double-depth or head-to-head burials.

HICKEY – a trade term for a monument with a sloping face.  Hickeys have a narrower top and are normally slightly thicker at the bottom than similarly sized regular monuments.

INSCRIPTION – the wording inscribed (or to be inscribed) on the memorial; with reference more to content or substance rather than physical lettering style.

LAYOUT (noun) – the arrangement of lettering and artwork to be engraved on a memorial, now often produced by computer.  A printed illustration of the layout can be sent to our client for approval prior to engraving the monument.  As usual, we do NOT charge extra for this extra service !

LAYOUT (verb) – to determine the appropriate sizes of lettering, spacing, and artwork and to arrange it properly prior to engraving.

LEDGER – a grave cover; usually (and probably best) a granite piece approximately the size of the interment which is set at ground level flush with the grass.

LETTERING [STYLES, FONTS……..] -literally hundreds of designs available, but many more suitable for signs than for engraving into granite.  Memorial lettering should have a sharp, clear appearance and be suitable for the type and colour of granite chosen.  A number of exceptionally good styles and engraving techniques have developed over the years into widely recognised standards.

LITHOCHROME – trade name for special liquid dyes capable of penetrating granite. Lithochrome is available in light and dark tints and can be applied to granite to enhance contrast. Although it is durable and long lasting, at LONS we prefer to select granites and engraving techniques which provide the best contrast naturally.

LONITE – a patented composite material made of hard marble aggregate and formulated binder from which (until the mid 1960’s), durable, low cost monuments were made by a carefully controlled mixing, casting, and steam curing process.  Although more resilient to weathering than most types of natural stone then being used, increasing labour costs, greater affluence, and new technology have enabled natural granite to become the unmatched material of choice today. 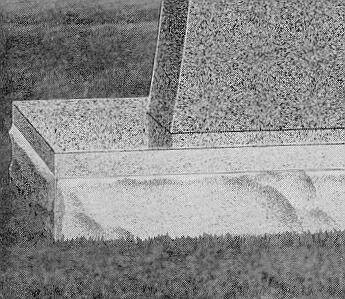 MARGIN – a trim-like contrasting finish (usually sawn or polished) along an edge or corner of granite,  but also could be "rock" (natural) left at the edge on a machined (sawn) finish.  "Margin" can also refer to an extension of the concrete footing beyond the base of the monument.

MARKER – a less costly form of memorial which lays flat (or slightly sloping) in the ground.  Markers are often set in cement to provide better visibility and a barrier against grass encroachment.

MEMORIAL – often used to mean "family monument" but more specifically a tribute or remembrance made permanent by a monument.

MONUMENT – usually the permanent, physical focal point of a memorial but often implies a memorial large size or public recognition.

NATURAL [GRANITE FINISH]- normally used to describe a stone surface that has not been sawn or polished.  This could be a new surface exposed by chipping or shearing, or an old, pre-existing weathered or glaciated surface

PAINT – a somewhat derogatory trade expression to describe improper use of, or use of inferior colour-enhancing agents for granite engravings.  Well established monument crafters like Lons know how to achieve highly visible engraving by the proper choices of granites and engraving techniques.  Where client preferences require highlighting, we use only high-penetration solvent dies specially designed for this purpose.

PILLOW MARKER – a bevel memorial, usually about eight inches high at the back and tapering down to about five at the front, which is set on a concrete pad.

PITCH (verb) – to shear rock with a carver’s handset [mallet and special chisels] to produce a shape with a ‘natural’ rock surface.

POLISHED – sawn granite that has been ground smooth and machine-scrubbed with  diamond abrasives to produce a (usually darker appearing) glossy smooth surface.

PROOFS – typically a rubbing of a cut stencil for final checking and approval before the granite is engraved with it. Usually needed only for custom work or client-supplied design work.

RAISED LETTERING – lettering that appears to be ‘raised out’ of the granite; actually produced by the background surface being removed leaving the lettering itself.  Raised lettering will (and usually does) appear polished if the original surface was polished, but can also be rounded or contoured by hand, although this is a more costly process requiring the removal of adjacent granite to a  greater depth.

RUBBING – a paper transfer of an engraving. Most familiar image is of placing paper over an engraving and gently rubbing it with a crayon or pencil.  Memorialists use a smooth tapered wood doweling to rub special carbon and tracing papers which enable rubbings to be transferred to, and [proofs] made from, stencilling material.

SANDBLAST – a high speed stream of abrasive particles driven by by air ejected through a ceramic nozzle at 100 pounds per square inch pressure.  (Ceramic nozzles are used because steel wears away too quickly).

SCOTIA CURVE – a quarter-round concave cut where two surfaces would normally meet at a (near) ninety degree angle.  This is a older, common contour, but many different types can be used; round, chamfer, rabbet, are some others.

The shapes are like the contoured edges found on fancy wood table-tops, except much larger and only used for accents.

SERP – more properly "serpentine" a popular curved shape of varying degree for tops of monuments. May be natural stone, smoothed, or polished.

SET/SETTING – the assembly of the components of a monument on the site.

SHAPE (verb) – to cut, by sawing and/or pitching, a block of granite into a desired basic contour such as heart, round, gothic, rectangular, or irregular to (complement a custom design).

SMOOTH – a granite surface that has been ground flat and free of surface irregularities.  There is no reflection or "shine" from a smooth surface (as opposed to a polished one).

STAKE-OUT – not a police operation, although sometimes a little detective work is involved…  Before a monument can be set out or a footing poured, the location in the cemetery must be determined. LONS assumes the responsibility of making sure that the appropriate people are contacted and the exact location staked out for our field crew.

STENCIL – a soft but resilient rubber matting applied to a granite surface on which an engraving design is cut.  With the proper pieces of the pattern pulled out before or during the initial [sandblast] engraving process, the exposed granite is removed while the rest remains protected; the sand simply bounces harmlessly off the rubber.

SUNKEN LETTERING – engraved or cut deeply into the surface; a stencil with the letter shapes removed is usually applied allowing the letters to be initially cut by sandblast, producing sharply defined edges. (see also stencil and raised lettering).

TABLET – a block of stone (now almost always granite) shaped and ready for engraving. A more desirable term than "die" but not in common usage.

TEXTURE – the general appearance and differentiation of granite with regard to to crystalline pattern, size, and range of colour.

TOOLED – a granite surface that has been textured by chiselling. Raw, sandblasted panels (required for raised lettering) tend to have a ‘natural’ look whereas ‘tooling’ produces a sharp, flatter surface. Tooling can add to the cost of an inscription and is not normally an essential operation.

VAULT – 1/ a heavy-walled room or chamber (often built into the ground) for the temporary placement of coffins prior to interment.
2/ a concrete container in which the casket is enclosed at internment.  A small, but growing number of cemeteries are requiring the use of vaults.

V-CUT – an optional form of engraving where sunken lettering is hand chiselled to form smooth sides tapering to a ‘V’ at the bottom.  Not all lettering styles and sizes lend themselves to this form of additional finishing.